It is always nice to sit by the log burning fire with a good book but not on August Bank Holiday Monday, Christmas maybe....

Well I hope you all had a good weekend, you wouldn't believe the days could be so different. On Sunday we took Jack & Bru to Aberdyfi for a paddle. Must admit they weren't that sure about the sea, but they enjoyed a good walk along the beach. Thankfully we picked the right day for it.....

I decided on Paperartsy's French Roast paint, it is such a great colour, not as harsh as black.

Then I tried to keep the colours in green, golds and silver as much as I could.
The puzzle looks a bit daunting when it's plain white but I tried to treat each piece as it's own little canvas.

So there's painted pieces with embellishments stuck on, Embossing onto metal foil.

Stamping and colouring with Distress Inks 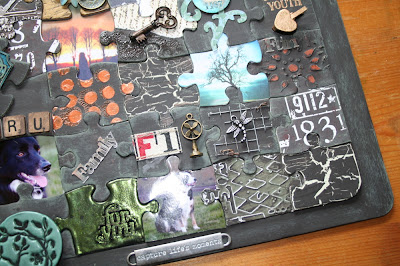 I have added a few Route 52 embellishment's and picture's of Jack & Bru. Generally just made it up as I went along. 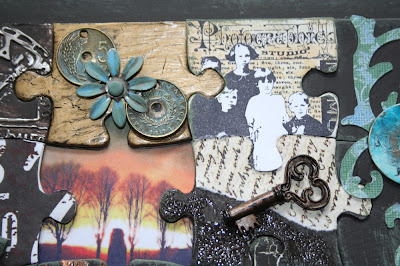 I have removed a couple of Jigsaw Pieces and placed a picture underneath. 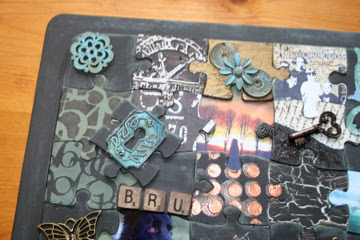 Dabbing paint through a stencil. Some started French Roast and dabbed with green, then another the opposite way round. 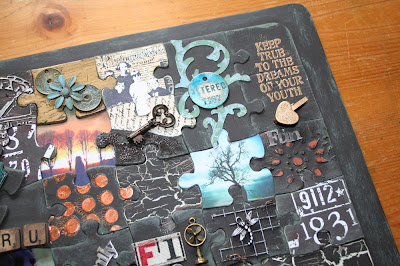 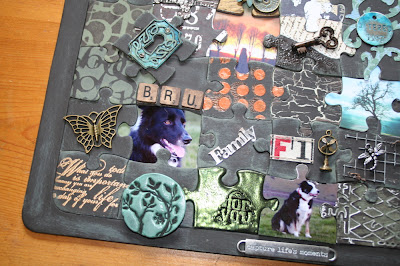 The green disc 2nd from the left at the bottom is utee that has been poured onto a stamped texture tread which had a cookie cutter sat on it.
The piece next to it is triple embossed then stamped into it at the end. 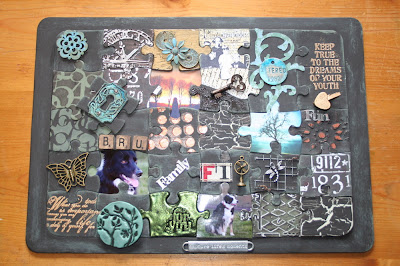 I'm pleased with this little project it's not perfect, but what I wanted to do was try and do lots of different techniques, to have a little reminder when I'm stuck for a idea.

That's it for now, time to think what to do next, I'll not ponder too long, just get stuck in.
Happy crafting
Sharon

What have we done to deserve this awful weather, oh well we can always get crafting. 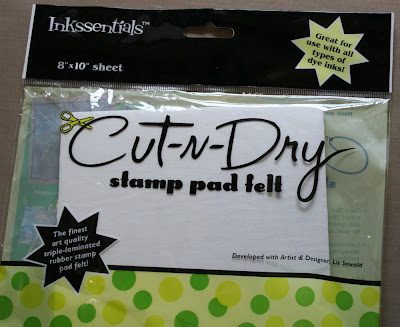 I have been having a little play with cut and dry felt. I added the picture just in case you have forgot what it looks like and you know you have some somewhere. 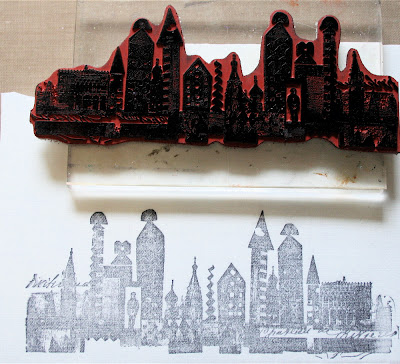 Then colour in using Distress Reinkers.....

It does not matter that it blends into the other colours.... 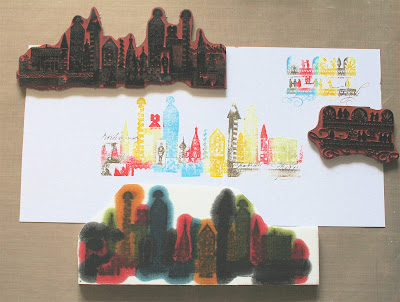 Hope you can see the effect you can get... 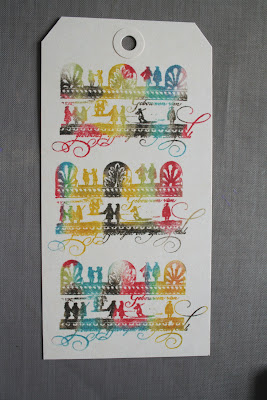 I also used a different smaller stamp to get a variety of colour on the same cut & dry felt. 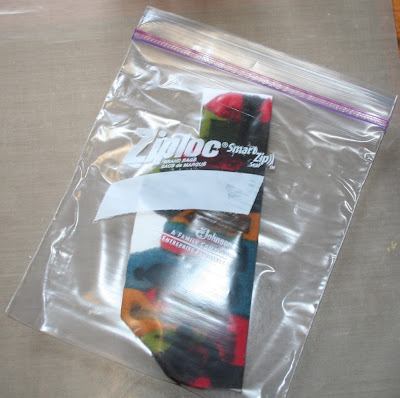 Then pop it in a ziploc or similar bag for a rainy day. If it does dry slightly you can use Ink Refresher to  moisten it again.

Next I painted a tag and sponged more paint through a stencil. 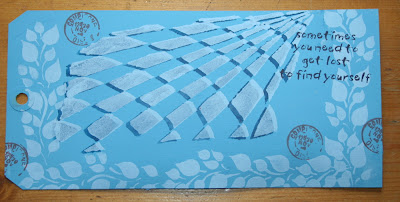 Then added the cut out picture I had stamped. 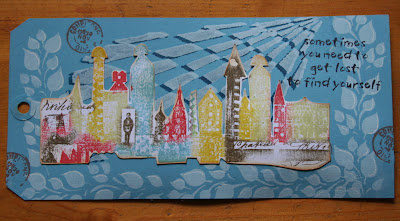 This idea works really nice with flowers and butterflies as well, where you want lots of colour.

Hope you enjoyed this and maybe have a go yourself.

Well it's just about time for our walkies before the rain starts again, so by for now and I shall be back soon.

Purple is the Colour

This time last week we were having Fish & Chips in Aberystwyth with Sue & Stuart (Jamie's Mum & Dad). We decided on the Pier Restaurant and I can say they were scrummy. They popped over to see us from Derbyshire.

We had a few wonderful day's and Sue even managed to get a bit of craft shopping in. They left us on Wednesday teatime so Sue was able to go back to work on Friday.

But she still managed to make a beautiful card and get it to us on Saturday morning, fast going......and here it is...... 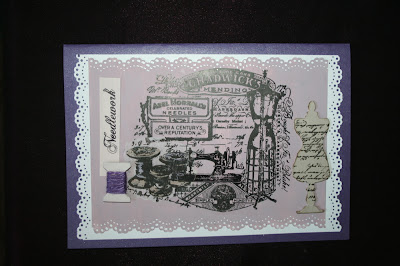 I can remember many years ago standing in Sue's kitchen and getting her to show me how to stamp, I owe a lot of thanks to Sue.

The stamp is Paper Artsy HP1216 the back ground was painted using Fresco Finish Acrylics- Moonlight. Also incorporated into the design is the mini Tim Holtz Dress Form Die.

Purple seems to be the theme colour this week, so here's a hanging tag I made.

I painted a large piece of card with FFA Pansy and Rose then dabbed Sherbet through a stencil. When it was dry I cut two tags using Sizzix Tag And Bookplates large die.

I cut one of the tags in half to create the bottom tag and connected then using a off cut of card which I stamped with the star design off LPC008 and added a pen nib. 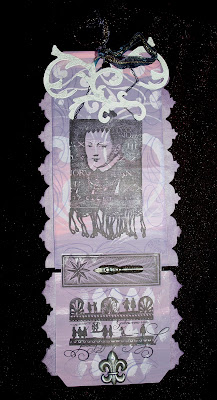 The main stamp and the one at the bottom is off LPC012.

I have used Crackly Tissue paper down the sides cut with a On the Edge die called Ornate and gently coloured it with Dusty Concord Distress Ink.

The Mini Flourish at the top is painted with a Pearl Dabber.

The Embellishment at the very bottom was a gift from Anneliese when she came back from Ranger U.

The sun is shining so I thought I would take some photo's of the flowers in the garden, we haven't had much time to spend in that department. 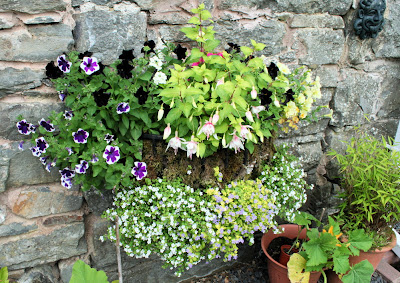 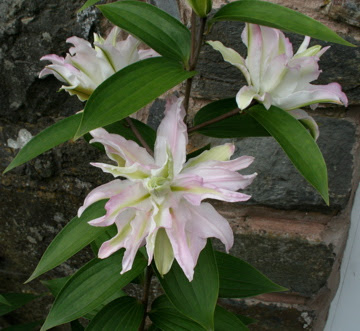 Chicken's not where they are supposed to be, Brusier And I shall soon have then back in the paddock. 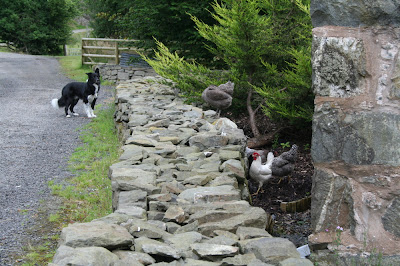 Where are they Bru and Jack? 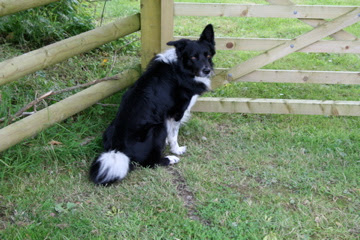 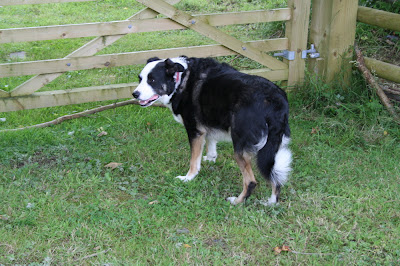 Back where we would prefer... But not for long I,m sure. 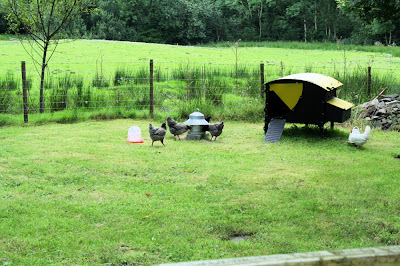 I am going to go and get inky, we have just taken delivery of some New paper's from Kaiser which need a coat of looking at, so by for now and thank you for looking in.

And I always appreciate you comments.

Where have I been you might ask, not far that's for sure.

Just the other end of a paint brush and not the kind I usually like to play with. Well 7 rooms painted and that's all I am doing for a while.

I have a few cards that I made before embarking on the marathon decorating task, that I would like to share with you.

Sewing room using the scrummy Paper Artsy Stamp HP1215. when I did this card it was fairly new out. But they have released some more fantastic new stamps since.

The quote is actually stamped onto some lining material, which is back onto Thorndon Hall Paper.

I found some old prima flowers and layered them with others cut from the  tattered garland die, metal embellishments are Route 52, the scissors, sewing machine and My Design little tab.

The bobbin is Sizzix Sewing room with a Tim Holtz trinket pin through bakers twine. 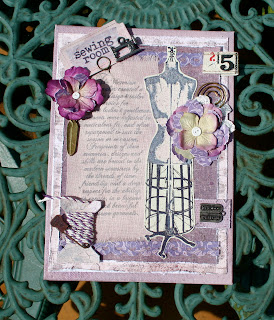 Sewing room stamped onto a ticket and then edged with a Tonic Studio perforated cutter, easier than sewing I thought.

Here are a few simple cards blending with distress Inks and white embossing. 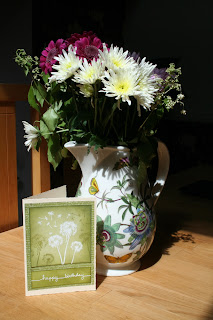 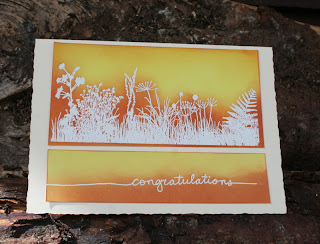 Thinking of you was stamped onto Speciality Stamping Card which I find is brilliant for stamping on buy I find not so good for blending Distress Inks, they do cover the card really well, here I have used Victorian Velvet and Worn Lipstick. 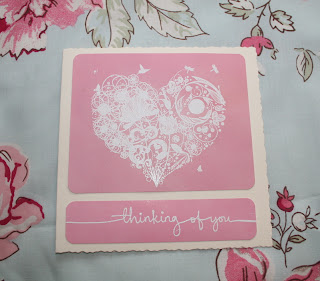 We have taken delivery of the new Lynne Perrella Stamps, one of which has found it's way to my craft room so I shall go and have a play and keep you posted.

Also we have some very special visitors arriving soon, Jamie's Mum & Dad it's so nice to have guests.

Hope you enjoy the sun that should be with us soon and have fun.....

Some of the products we sell